"A superb work of a wonderful writer." Charles Baxter

Who is Brendan Wolf? It all depends on who you ask.

* To the staff of a Minneapolis nursing home, he's the devoted partner of a much older man who's recently suffered a debilitating stroke.

* To the women of a conservative, Christian pro-life organization, he's the tireless volunteer grieving over the recent loss of his wife and their unborn child.

* To one gay activist, he's the unaffectedly charming, yet directionless and unemployed man that he's fallen hopelessly in love with

* To his brother and his brother's wife, he's the lynchpin of a scam that will net them enough money to start their lives over somewhere new.

* To the general public, he's an armed and dangerous fugitive

All of these people - and yet none of them - Brendan Wolf is an ambivalent lover, reluctant conspirator, counterfeit Christian, and, most of all, an unemployed daydreamer obsessed with a dead man.

From the author of the award-winning The Year of Ice, this is a tour-de-force - a compelling, hilarious, heart-breaking novel about one utterly typical, and completely original, figure: Brendan Wolf.

"Brian Malloy has delivered on the promise of his first book with a complicated, heartfelt follow-up...There is strange beauty in this book, too. Malloy has a talent for creating fascinating stories that seem cinematic in their purity and focus...honest and affecting." - AfterElton.com (Logo Television)

"Malloy masterfully blends the page turning plot and brooding atmosphere of neo-noir with an affecting sensitivity to the struggle for human connection." - OUT

"Malloy's prose has a meticulous sheen that bears comparison to such careful crafters as David Leavitt and Mary Gaitskill." - Lambda Book Report

"While Brendan is undeniably at center stage, Malloy also masterfully brings us beautifully rounded supporting characters who all have important plot moments of their own. And, as he did in Year of Ice, Malloy credibly sustains the physical environment in which those characters function,in cinematic yet recognizable fashion. In short, Brian Malloy has brought us yet another outstanding work." - Prairie Flame

"Malloy is an accomplished writer, and Brendan Wolf is the kind of character that readers are fascinated by, yet fear getting to know too well. Malloy pushes the reader into getting to know Brendan, whether they want to or not, and that’s exactly how it should be; Brendan is a morally ambiguous character, and reading his story makes the reader uncomfortable by raising the question: if we were in his shoes, would we do any different?

"This novel is a departure from Malloy’s first novel, The Year of Ice, also a fine read. With two such different books to his credit, it’s clear he is a writer to watch, with a vivid imagination and clarity." - New Century Reading

"...much like his previous novel, this one unveils a dark and complex story with heart-breaking characters. His novels are very honest and real, always highlighting the complexities of human relationships and self-exploration." - The Rake

"As is true of Patricia Highsmith's wonderful novels, just when you think you know where Brian Malloy's BRENDAN WOLF is going, its plot goes somewhere else. I can' t remember the last time I read a book with so much genuine (but unsentimental) sadness and so much genuine surprise. At this story's core is a man who is in a slipstream of identities and has always found it impossible to be himself. This is a great recipe for trouble, and I read the last few chapters of this fine novel too quickly for my own good. A superb work of a wonderful writer." - Charles Baxter, author of The Feast of Love.

"BRENDAN WOLF manages to be both hilarious and desperate, a book that is as complicated as its wily, winning protagonist. Brian Malloy has created an amazing character in Brendan, an ordinary man doing his best to keep hoping for better. I read BRENDAN WOLF in two days, and now I'm going to go read it again." - Amanda Eyre Ward, author of Sleep Toward Heaven

"A wonderful novel. Brian Malloy begins with a gritty situation worthy of a great noir thriller, then adds real people, real emotions, and real issues, and keeps adding more until his book becomes a very rich, large-scaled portrait of contemporary American life. Best of all, he gives us a complex protagonist who is sadly human, oddly likable, and excitingly unpredictable." - Christopher Bram, author of Father of Frankenstein.

"Twisted, strange, awesome and wise, BRENDAN WOLF redeemed my faith that a literary book could be exciting for its content as well as its words. This is a gritty, real, unbelievably bold novel that will break your heart and leave you haunted by its entirely original characters." - Lisa Tucker, author of The Song Reader.

“Unflinchingly smart, surprising and shattering both, and written in prose as clean and clear as a mountain stream, BRENDAN WOLF is nothing short of brilliant.” – Caroline Leavitt, author of Coming Back to Me and Girls in Trouble

Short-Listed for the Ferro-Grumley Award 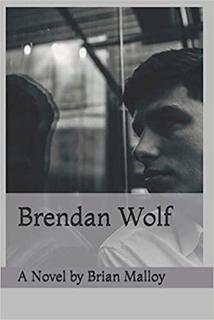